It’s been a while since I posted last, in part because I haven’t been feeling all that creative in the cocktail department. I’ve mostly been drinking old favorites or easy to throw together things. But tonight I got the nudge I needed to tinker. That nudge was in cleaning out the fridge I found a bottle of lychee juice left over from New Year’s Eve. Clearly, it was cocktail time! 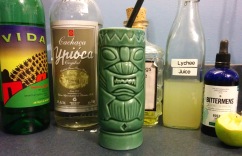 I also wanted to get some use out of the ice crushing bag and tiki mug that I got for Christmas, so I decided to go in the tiki direction with this (as if I need much of an excuse to make a tiki drink). It also gave me the right template to use relatively a lot of fruit juice, since that was the point.

This could be confused for a sour, with the lime bright and noticeable and the mouthfeel light, but much of the bite really comes from the cachaça. The mezcal and absinthe would normally be stand-out flavors in a cocktail, but here, they mix with the lychee to provide a balanced mid-range. If this is missing anything, it’s a base-note of some sort. That would usually be the dark rum component, but I’m not sure this want’s that sort of flavor. I think it might mute the brighter notes of the lychee. I don’t think that’s a fatal flaw, though, as something this refreshing is truly dangerous to be drinking out of a straw…

I’m going ahead and calling this a punch because I think it would scale up very well for a party, perhaps with a bit of simple to give it more heft. I’ll give that a try once the weather gets warmer. 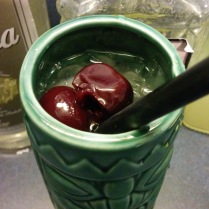 I made the cherries for the garnish last summer when I found a pound of them in the fridge right before I left town for a week (noticing a theme?). I forget the exact recipe I used, but I took a standard brandied cherries recipe and switched out the brandy for rum and keeping a health dose of spices there. Surprisingly easy to make if you already have a basic canning setup. I recommend it!